March – Book of the Month

Simon Thurley – Houses of Power: The Places That Shaped the Tudor World – £30.00 Hardback

When Henry VII became the first Tudor monarch in 1485, he inherited a vast range of property, from castles and palaces, to more basic residences.

However, one of his first priorities was his personal safety, and he set about improving security, and adapting buildings to suit his needs. This included the Tower of London, Windsor castle, and Sheen (which he renamed Richmond after his father).

The buildings became more comfortable residences as well as the seats of power, and this trend was continued by Henry VIII.

Greenwich palace was the favourite of Henry VIII, but he also constantly remodelled Hampton Court.

The Royal houses that Elizabeth I inherited had developed to enhance the Tudor court and ease the administration of Royal duties.

This is much more than a book about magnificent buildings, occupied by royalty. It is a reflection on how the Tudors grew and evolved in to one of the most important dynasties in history. 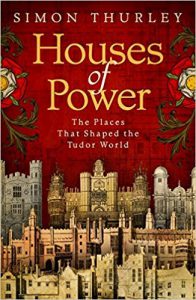